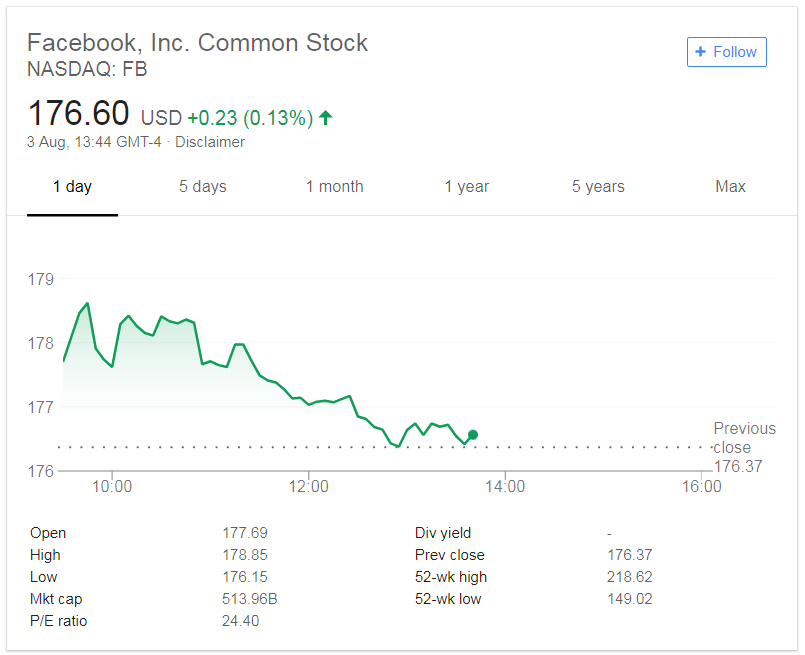 Things don’t seem to be working out for Facebook or its CEO, Mark Zuckerberg. Last Thursday, shares of the social media giant plunged as low as 19% in trading as investors reacted to rumors and predictions that the revenue and user growth are slowing down significantly. This was the biggest drop in stock in the last three months and this low price resulted in wiping out almost $120 billion in market capitalization for the social network. Due to this decline, other tech and internet stocks were also dragged down, which included companies such as Snapchat and Twitter. When markets closed down on Wednesday, the market cap of Facebook was approximately $629 billion.

However, when it closed on Thursday, the company’s value had reduced to $510 billion. According to data and statistics, this massive decline in the market value is actually the biggest single-day drop that has ever happened in the history of a public limited company. As far as the net worth of Chief Executive, Mark Zuckerberg is concerned, it plummeted by more than $15 billion due to the company’s stock dive. Nonetheless, Forbes’ net worth tracker in real-time showed that the CEO’s personal wealth was still around $67 billion. Why did this happen?

Investors had become concerned about the growth of Facebook in the light of signs that it was cooling down. In the second quarter of 2018, the daily active users on Facebook remained the same in the United States sequentially and as compared to the first quarter, they actually showed a decline in Europe. This marked the first time that such a decline had been witnessed by the company in recent quarters. The earnings report was not taken very positively by the investors and the biggest story was the forecast of decelerating revenue in the second half of this year.

Analysts have stated that even though the company is still growing at a very fast rate, its days of enjoy revenue growth of 30% and more are quite numbered. David Wehner, the CFO at Facebook, informed the investors that in the next few quarters, there would be a significant decline in the revenue. He also disclosed that the operating margin of the social networking company would decline from 44% in the second quarter to the range of mid-30% in a time frame of around two years or more. In the second quarter, the total revenue growth of Facebook dropped about 7% as compared to the first quarter.

Wehner added that these revenue growth rates would continue to drop by single digit percentages in the third and fourth quarter of this year. There are a number of factors that have contributed to the slowing sales growth of the company and such as the exchange rate of currency. Moreover, Facebook is also planning to make investments in products such as Stories, which have lower levels of monetization currently. The CFO said that their revenue growth would also be impacted due to the launch of new controls for users because they allow them to limit the data they share with the social network.

Researchers have said that after the data-privacy scandal associated with Cambridge Analytica, there have been changes due to regulatory and legal developments for supporting the Facebook platform and its users. However, these changes will eventually end up restraining the social network’s growth and profits for at least the next few quarters. In the second quarter, the daily active users on Facebook increased 11% as they rose to 1.47 billion on average in the month of June. But, this is a decline in the growth of daily active users of 17% that was seen a year ago.

It should be noted that even after the selloff in the company’s stock, it has still managed to remain hugely profitable and its growth profile is something that traditional media companies would love to have. The increase in revenue in the second quarter is a whopping 42% as it reached $13 billion and there was a 31% increase in net income, which hit $5.1 billion. As of June 30th, the global monthly active users on the platform were 2.23 billion and this was a year-on-year increase by 11%.

Regardless, it seems that things are turning bad to worse for the once-reigning king in the social media industry. Even though it wasn’t anywhere nearly as bad as the almost 20% decline last week, Facebook took another beating on Wall Street this Monday. There was a further reduction of 4% in Facebook’s stocks in early trading because investors are still continuing to digest the mixed earning news, which was full of warnings about slowing growth in the future. The earnings report is chipping away at the market capitalization of the company and also the personal fortune of the social media’s founder, Mark Zuckerberg.

As of July 25th, 2018, Zuckerberg is the owner of 14.18 million Class A shares in the company and 441.6 million Class B shares. The Bloomberg Billionaires Index indicates that the stock fluctuation has caused his net worth to decline by nearly $660 million. The market capitalization of the company is currently $487.5 billion and this is a loss of about $27.7 billion from July 24. Nevertheless, this massive drop has not had any impact on Zuckerberg’s rankings amongst the list of billionaires in the world.

On July 25th, he dropped to the sixth position from the third in the list of world’s richest people. He is still ahead of Carlos Slim by $7 billion, who holds the seventh position, and remains shy of Amancio Ortega by $3 billion. This sustained decline in Facebook’s stock price has come soon after the shares reached an all-time high in early July and were valued at $202.23 per share. This happened even after the Cambridge Analytica scandal and the poorly received testimony of Zuckerberg in front of Congress regarding this incident.

Every day since the announcement of earnings news, the shares have been declining, but investor bargain hunters have succeeded in resisting the urge of buying these shares on the dip.